There have been only two types of cooktops for many years. One is electric and the other is gas. But in the recent years a new technology for cooking has been invented, which is called induction. In this article, we will cover what is an induction cooktop and, how the induction technology works with some pros and cons.

What is an Induction Cooktop

Induction cooktop is a device which is fully different from the gas and electric burners or stoves. Induction cooktops can be cleaned very easily and they can even cook food faster than any other kind of stoves. They are totally unique from electric or gas cooktops. It is ideal for any kind of meals which require temperature controls, such as desserts, certain sauces, confectionery etc.

The induction cooktops use electromagnetic power which is very different from normal electric and gas stoves. The supply of power is passed to the induction cooktop by a coil in the device. When the electricity in the coil works, a field of electromagnets is created around it. When a perfect cooking pan is put on the surface, a current is activated in the vessel. This leads to generation of heat in the pan itself. 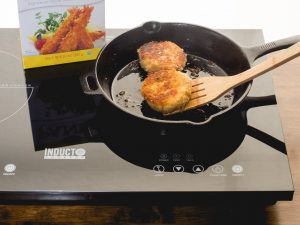 The induction cooktops provides you a very good control over the temperature which will give you precise settings of heating. So you will not burn or overcook a dish. Normal cooktops require some time to heat up. But in induction technology, there is no need for waiting. The coils will warm up, so the device will reach the desired temperature immediately.

When the matter of safety comes, induction cooktop is the safest device to cook. Even when it is turned on, it is very cold to touch. Traditional cooking stoves required a long time to cool down, but these cooktops are never hot to touch. I’m a clumsy cook, I used to burn hands often. But now, after owning an induction device, it has become an incident of the past.

Controls of an Induction Cooktop

Every induction stove has the following control buttons:

There is an on/off button, which is used to switch power on and off.

A LED display is present.

There are controls of Heating, Timer.

There is a + and – to increase/decrease temperature, timer.

The induction cooktops are obviously energy efficient. The cooking pot sits direct on the glass, so there is a direct connection. So no heating up is needed, and less energy is consumed.

The devices have come with a wide range of options, which starts with a 100-watt simmer setting. Then it will increase to 3300 watts for boiling. Most of the 30 inch cooktop models consist of four burners. The ones of 36 inch have six heating units. They provide a high total of watts available.

Usually, the 7 inch warmers usually require 1200-1800 watts. The stoves with 11 inch burners have the ability up to 3700 watts. But the induction cooktops are 90% efficient with power usage. They use 2.8kW to deliver 2.52kW, which is also more efficient than gas. Gas stoves use 3.5kW to generate 1.75kW.

Induction cooktops are 90% efficient which is far greater than gas stoves and electric stoves, which are 30% and 70% efficient respectively.

Top 5 Reasons to Own an Induction Cooktop

Some Disadvantages of Induction Cooktop

Apart from these advantages, induction cooktops have some disadvantages too. The method of cooking in these devices requires some time to be used to. Some methods of cooking also may have to be changed. Meals which require open fire, such as grilled meat or toasting may not be possible in these cooktops.

Though this device will save money in the long-run, it may lead to some costly investments. Many will not be able to use their non-magnetic cook wares. Users may have to invest for purchasing new ones, i.e. magnetic ones. This may be an extra expense for the users. Stainless steel, enamel, cast iron pans are suitable but ceramic, glass, aluminum cannot be used.

But currently induction cooktops carry a higher price tag than normal stoves, i.e. electric or gas. The main reason for this is that the production of portable cooking devices is low in quantities like normal stoves. The devices use copper, so the raw materials costs are higher than usual. But when the devices will gain huge popularity, the prices will fall. The prices have already begun to fall and are coming in range. And very soon the prices will come to a pocket-friendly range.

Though induction cooktops have some disadvantages, you should keep in mind that they are much faster and energy efficient than other cooktops. When you will own it, it will make up for its high price in no time.

Still, now, who are mesmerized by the magic of induction cooktops, the cost may not be the first factor compared to lifestyle and performance benefits. It’s upon the buyer’s mind whether they will but it or not, but we just wanted to let everyone know how great induction technology.